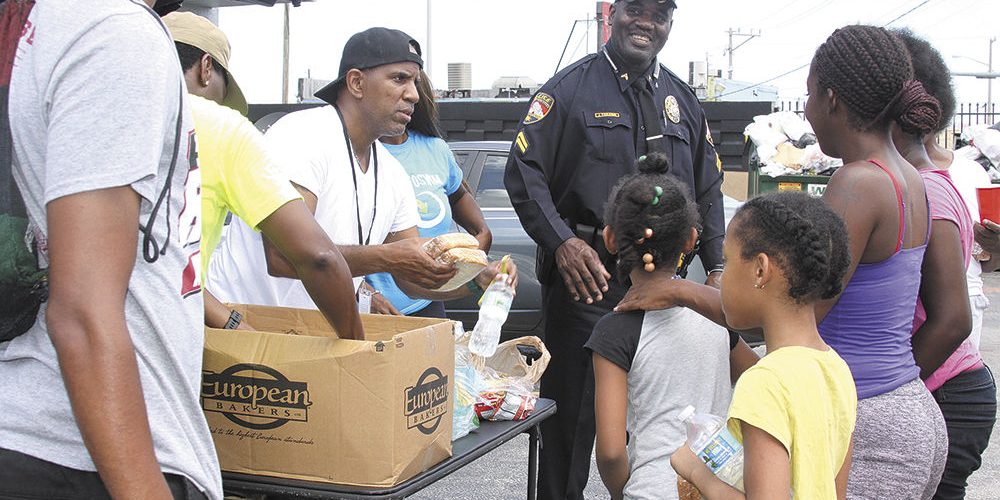 Miami-Dade County School Board Member Steve Gallon III and Opa-locka city officials hand out sandwiches, fruit and water to children and parents at different apartment complexes on Sept. 13 in the aftermath of Hurricane Andrew. The residents did not have power in their units and the children were out of school and eager to get the refreshments.

As utility and oil companies restore lights and gas around town, hundreds of people in urban core neighborhoods wondered aloud if they’ve been forgotten.

Take the neighbors at the Our Home Apartment Corp. complex along Ali Baba Avenue in Opa-locka. Residents — mostly women and small children — had no electricity last Wednesday, so they sat along the steel balconies and busily fanned themselves with paper, towels or whatever they could find.

Two Opa-locka commissioners — Joseph Kelley and Matthew Pigatt arrived with a small caravan of people, including School Board Member Steve Gallon III and members of a group that provides free water safety lessons in the small city.

The caravan brought food: sandwiches, bananas, water — something that Barbara Beneby said was scarce at that point. “Usually someone from the city comes to check on us. But this time no one came until you all showed up,” she said.

“We’re very appreciative,” Beneby said. “Some people didn’t know how they were going to eat. They had just paid rent, and it would be hard to buy food.”

Beneby, the onsite manager, said no one from a relief agency, government office or utility company had stopped by since Irma roared through Saturday and Sunday.

A bigger headache, she said, is a downed power line that laid to rest on the metal fence that surrounds the building. She and another tenant noticed sparks and smelled something burning along the fence.

Beneby said the few residents who have vehicles were afraid to go out lest they inadvertently touch the gate. A county garbage truck crew has stopped by twice to collect trash, but wont’ go inside for the same fear.

Even worse, she said, children play nearby, so she has to keep a watchful eye to ensure they aren’t electrocuted.

Beneby and Pigatt said they’d put in a call to FPL about the downed wire and the status of the building regaining electricity. “There’s a delayed response in these communities,” Pigatt said.

By Thursday afternoon, things looked somewhat better. Electricity was restored to the apartment complex, meaning Beneby had one less hassle.

“Oh, wow. That was a relief,” she said. “We had people sleeping in the car, in hallways for relief. Both adults and children.”

The problem with the downed line remains, though.

Richard Gibbs, FPL spokesman, said he was unaware of the request.

“We’re reviewing the status of the incident and we will be able to determine if we receive prior notification of the downed wire,” Gibbs said.