Was there a plan to feed the children pre- and post-Irma? 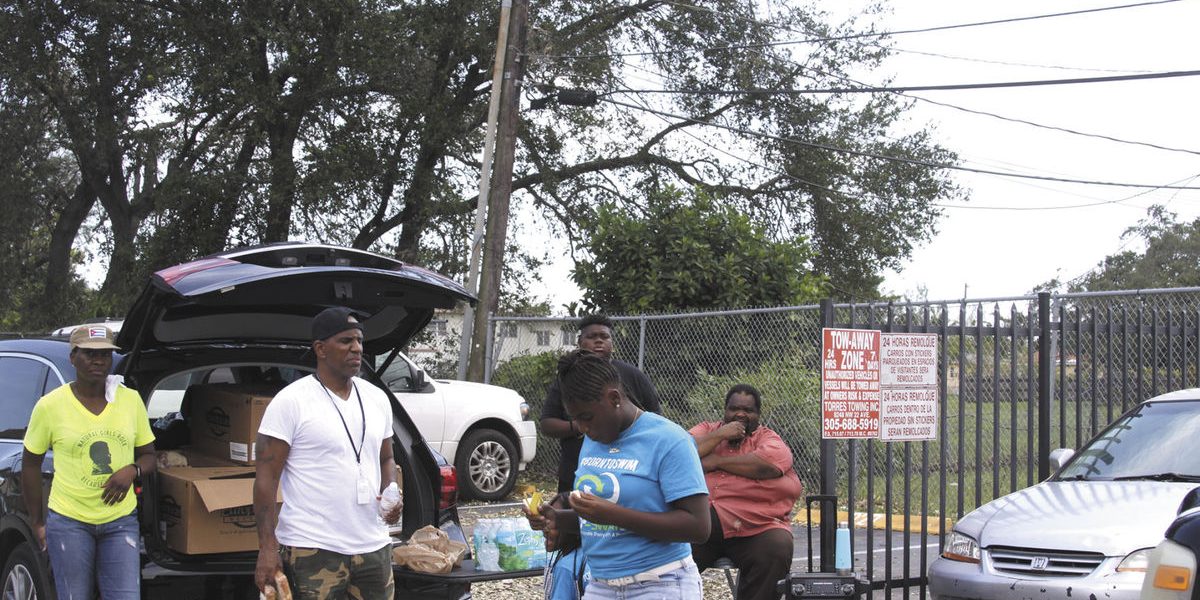 Was there a plan to feed the children pre- and post-Irma?

School board member Steve Gallon questions whether there was a plan to feed students in light of Hurricane Irma.

District 1 Miami-Dade County Public Schools board member Steve Gallon III doesn’t believe the school system had an immediate plan to feed students who had been cut off from the free and reduced lunch program during the upheaval caused by Hurricane Irma.

Gallon double-downed Friday that if the system had had a plan, board members were not informed. He cited a late-night, Tuesday, Sept. 12 memo he sent to Schools Superintendent Alberto Carvalho and other board members on the matter. The memo asks the superintendent about the district’s plan to feed “eligible” students and what were the reimbursable options to the district for the expenses incurred for such an effort.

By Thursday, the district launched a massive feeding effort with packaged breakfasts for children and Meals Ready to Eat (MRE), a complete meal in a package with a heater to warm the food. Some packets included vegetable lasagna and cheese tortellini. At th e launch at Frederick Douglass Elementary School and seven other school sites, schools officials announced that they would activate two additional sites, all serving hot food until schools reopened Monday, Sept. 18.

School system spokeswoman Daisy Gonzalez-Diego on Friday said the district had served more than 50,000 meals to

not just children, but to everyone who wanted a meal.

“People were so thankful for what we were doing,” she said.

“I am encouraged by the recent effort to provide healthy meals to the children who have been out of school for over a week and devastated by the aftermath of Hurricane Irma. However, I remain concerned that such provisions were not either contemplated or reflected in any plans or updates that I had been privy to,” Gallon said. “This absence of a plan is what prompted my communication to the Superintendent at near midnight on Tuesday. Although I remained without power in my own home, I couldn’t sleep knowing that many poor children were approaching a week of not being in school and having access to healthy meals.”

He’s not alone when it comes to confusion about when the feeding program as scheduled to begin.

At the district’s first food distribution of packaged breakfasts and MREs Thursday at Frederick Douglass, District 2 board member Dorothy Bendross-Mindingall was disappointed that after a full week of students not having hot meals at school, the feeding program debut with packaged food.

“I think we [the board] could have done more had we probably sat down and been a part of all the conversation,” Bendross-Mindingall said. “We are elected to take care of the people. I just know I got a message that this was going to happen.”

Schools officials say there was such a program all along and that really, it is Miami-Dade County’s Emergency Management’s responsibility to feed the community after a natural disaster such a hurricane. Gonzalez-Diego said that 43 schools served as shelters and many schools did not have power rendering their kitchens useless. The system is the fourth largest in the nation with 392 schools serving 345,000 students.

County spokesman Mike Hernandez said Monday that Mayor Carlos Gimenez had asked residents to have three days supply of food on hand. At an emergency briefing Sept. 12, Gimenez said he was not doing a food distribution. At that time, two days after Irma had grazed Miami-Dade, more than 50 percent of Florida Power and Light’s customers were without power.

Hernandez said the school system is right, that it was not responsible for feeding the students.

“The school board is a good partner with the county,” he said.

At a Level 1 activation, the county’s emergency operations policy calls for coordination with and activation of several department and agencies in preparation for the storm and actions after. That plan includes deploying food, water and ice.

A frantic Rep. Roy Hardemon said he went to the Emergency Operations Center in Doral Tuesday and “talked to anyone who would listen” about his request for food and ice for District 108 residents. His pleas went unanswered.

Students in the free and reduced lunch program could eat at least two meals and snacks at their respective schools but have not been able to do so since the system shuttered its doors Sept. 7 in preparation for Hurricane Irma.

The district provides free breakfast to all students, regardless of income eligibility. Gallon and Bendross-Mindingall’s districts have a significant population of students who participate in the federal feeding program.

The district set up 10 sites across the county to feed students living across 2,000 square miles. It is unclear how many of the eligible students actually use the program.

During an interview Tuesday, Sept. 12 about an effort to distribute sandwiches, fruit and water in Opa-locka, Gallon saw a wider need.

“Understand this, we are the 4th largest district in the nation– one that I am proud to have spent the majority of my life in as a student, teacher, principal and district administrator,” said Gallon. “We have received numerous awards and accolades. However, our future legacy will not be defined by awards, but how, in the midst of tremendous challenge we rise to the occasion and did right by our most vulnerable children when they needed us most. I believe that time is now. And I believe the Board, superintendent and staff will figure this out and that failure to do so is not an option.”

Gallon asked whether the district plans to feed students who are out of school while the school system readies itself after Hurricane Irma blew through South Florida last Sunday.

Irma, initially a category 5 storm, was a collision course with South Florida, after devastating several Caribbean islands, including Antigua and Barbuda and the U.S. Virgin Islands. When the storm tracked to make landfall in Miami-Dade, Gimenez issued a mandatory evacuation of some 600,000 people, the largest evacuation order in its history. The county coordinated with the Red Cross and the school system to open 43 shelters that ended up housing about 31,000 humans and hundreds of pets.

Gallon said that the problem became more acute after families exited shelters because they left behind the opportunity to eat three meals per day.

Gallon shared what he called the “harsh realities that this devastation has caused to families and children, especially those living in poverty. And now that the shelters have been closed, some of the meals that were provided to those who reported to the shelters will cease.”

Gallon said in the memo, “I am inquiring as to the following:

1. Does the District have a plan to provide meals to eligible children?

2. Can select distribution sites be explored considering that Thursday will mark a week of students being out of school and possibly without a healthy meal/snack?

3. Can there be an exploration of donors/community partners to support such effort?

4. In that FEMA or NSLP may reimburse for such meals, can this be confirmed?

“The operational infrastructure and system of reimbursement for meals for eligible children positions M-DCPS as the best provider for this, especially when it comes to our children.

“Please review this matter and advise of its feasibility. This is clearly an issue for all poor children – from Homestead to County Line Road.”

Meanwhile, many not-for-profits organizations, churches and individuals, launched programs to feed and aid those adversely affected by the storm.

Some residents feel they were forgotten
November 6, 2017