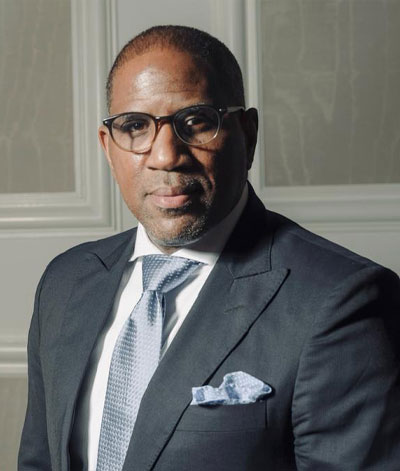 Dr. Gallon is a lifelong educator who served as a teacher, assistant principal, elementary and high school principal, district administrator, and Superintendent of Schools. He started his career as a classroom teacher. He has taught at the elementary, middle, and senior high school levels. He graduated Magna Cum Laude with a degree in English Education from Florida A & M University in Tallahassee, Florida and became the first of his six siblings to graduate from college. Dr. Gallon earned a Master’s Degree in Educational Leadership and a Doctorate in Educational Administration and Supervision, both from Florida International University in Miami, Florida. He also participated in postdoctoral leadership institutes on School Reform and Management at Harvard and Stanford Universities.

Dr. Steve Gallon III rose through the ranks as a professional educator and over the next 25 years, distinguished himself in the field of education, specifically in the area of supporting improved teaching, learning, and leadership in urban educational settings. He became an assistant principal and was later appointed principal of Holmes Elementary. In his third year, after marked improvements in student outcomes and community involvement, the school was removed from the State of Florida’s List of Critically Low Schools. He then became principal of Miami Northwestern Senior High School, where he would serve for seven years – earning the third longest tenure in the school’s 60-year history.

In 2005, Dr. Gallon was promoted to the position of Administrative Director in School Operations/Alternative Education in which he was charged with overseeing schools and programs for at-risk students and underperforming students. Under his leadership, there were marked improvements in student performance, attendance, suspension reductions, and student and staff satisfaction.

In 2008, Dr. Gallon became the first Black administrator to come through the ranks of the Miami-Dade County Public Schools and rise to the level of Superintendent when he was selected unanimously via a nationwide search to be the new Superintendent of Schools in New Jersey. Under his leadership, his district realized double-digit gains on all five of the indicators of State’s School and District Accountability System known as QSAC – with the area of Curriculum and Instruction increasing from 8% to 68% within 24 months of his tenure.

Dr. Gallon has served as a principal in an educational management and consulting firm working with several districts, schools, and organizations in developing and implementing educational and school turnaround strategies, as well as community-based solutions. He also served as a Board Member appointed by the Miami-Dade County Board of Commissioners for the Miami-Dade Economic Advisory Trust where he was charged with providing policy and implementation oversight that ensured the equitable participation of Blacks in Miami-Dade County’s economic growth through advocacy and monitoring of economic conditions and economic development initiatives in Miami-Dade County.

Dr. Gallon presently serves as a Board member of the Miami Children’s Initiative (MCI) which was established and funded by the Florida Legislature in 2008. The sole mission of MCI is to address the needs of the community by investing in children and by providing a unified system of support, education and care that begins before birth through college and career. A member of Kappa Alpha Psi Fraternity, Inc., Dr. Gallon has received numerous awards for his outstanding professional and community service. He was recognized as Region III’s “Rookie Principal of the Year”, Elementary School “Principal of the Year”, and “Educator of the Year” by Zeta Phi Beta Sorority, Inc. Dr. Gallon was also the recipient of the NAACP Mary McCloud Bethune Educator’s Award. The College Board also recognized Dr. Gallon as one of eight Americans featured nationally in their publication entitled “Heroes of a Different Kind” for leadership and service in education. In 2013, he was named by ICABA as its South Florida Educator of the Year.

In June 2016, Dr. Gallon was honored by the City of Plainfield, New Jersey Municipal Council for his leadership and vision in the establishment of the Plainfield Academy of the Arts and Advanced Studies during his tenure as Superintendent. The school was recognized by U.S. News and World Report as one of the Best High Schools in the U.S. after boasting a 100% graduation and college attendance rate.

In 2017, Dr. Gallon honored by the City of North Miami and was named as the Zeta Phi Beta Sorority, Inc’s Eta Nu Zeta Chapter’s “Man of the Year” for his commitment to excellence in education to the students and community.

In March 2017, Dr. Gallon was also named as one of “South Florida’s Most Powerful and Influential Black Leaders for 2017” by Miami’s Legacy Magazine. A 25-year resident of Miami Gardens, Dr. Gallon is also an author who has written and published three books on education. His spirit of enthusiasm, intellect, and dynamism, makes him one of the most respected educational speakers and consultants in the country. A man of faith, Dr. Steve Gallon III is a proud member of Antioch Missionary Baptist Church of Miami Gardens.

The Benjamin Elijah Mays Lifetime Achievement Award recognizes an individual who—during his or her lifetime—has demonstrated a longstanding commitment to the educational needs of urban school children through his or her service as a local school board member.

In April 2018, he was elected to the National School Boards Association’s National Steering Committee for a three-year term and on May 14, 2018 he was named “Educator of the Year” by Legacy Magazine.

In March 2019, he was voted Vice-Chair to National School Boards Association Council of Urban Boards of Education’s (CUBE) Steering Committee.

In September 2019, he was selected as the 2019 Honoree for Education by the NAACP Miami-Dade Chapter.

As a Board member and Vice Chair, Dr. Gallon successfully proffered over 50 Board items:

In 2020 Dr. Gallon was re-elected unopposed to another 4 year term. And in 2021, was re-elected Vice Chair for the third consecutive year of the Miami-Dade County Public School Board.

In 2022, Dr. Gallon’s life and career were chronicled in the Documentary Film “Light Found In The Dark: The Life of Dr. Steve Gallon III”. To view, click here.

He is also the author of two books, Educating with Love and Without Compromise and When Morning Comes, a book series which fully chronicles the urban school principal and life growing up in Liberty City. See below:

Dr. Gallon is also the creator, producer, and host of “Real Talk with Dr. Steve Gallon III” which focuses on education and related issues. View here.

He has also been a guest on national cable networks CNN and MSNBC to provide insight and perspective on educational and related issues. See below:

In 2022, Dr. Steve Gallon III was awarded the Florida School Boards Association’s 2022 President’s Award for Unparalleled Leadership and Courage at the State and National levels during politically difficult and tumultuous times in the midst of the pandemic.

The Principalship: Tribulations and Triumphs