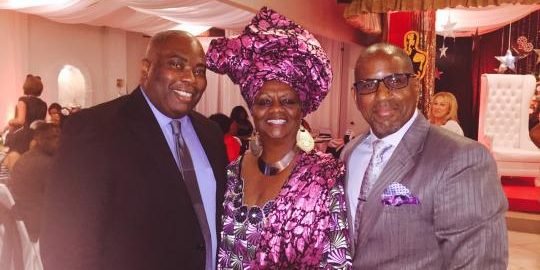 Dr. Steve Gallon III Supports Recognition of Sherman Henry, AFSCME President of Miami Local 1184 Retiring AFSCME Local President was honored in a celebration of his legendary leadership and service to the members of AFSCME Local 1184. Mr. Sherman Henry rose through the ranks of Miami-Dade County Public School from positions of paraprofessional and custodian to the head of the nations 4th largest district’s second largest union. A product of Liberty City, Mr. Henry went on to earn a Master’s Degree from Florida International University and distinguish himself as a stalwart in the organized labor movement of Miami. Dr. Steve Gallon III was proud to give words as a fellow classmate, colleague, and cohort who also rose through the ranks of the Miami-Dade County Public School to become its youngest principal ever and first African American from the ranks of the school district to rise to the position of Superintendent of Schools. “Start where you are, use what you have, and do what you can,” stated Dr. Steve Gallon III to the packed audience as he reflected on Mr. Henry’s successful personal and professional journey. Dignitaries in attendance that also spoke included School Board Member Dr. Dorothy Bendross-Mindingall, Aventura Mayor Enid Weisman and retired legendary School Board Member and educator Dr. Solomon Stinson.