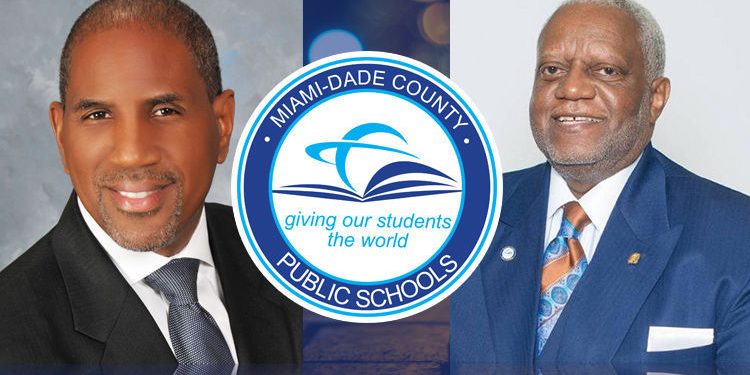 Fresh off his victory celebration in the District 1 School Board race, Steve Gallon received well-wishes from his campaign team, new board colleagues and Superintendent Alberto Carvalho. He didn’t hear from Wilbert “Tee” Holloway, the man he defeated in a sometimes ugly, heated election.

“I have not heard from Mr. Holloway,” Gallon said.

Since Election Night, Gallon has made the rounds, thanking supporters along the way, and repeating his campaign promises to tackle low performance and raise test scores in District 1, using his position as a platform for change.

“We cannot be silent in terms of what befalls our children. This is not about the money, and not about a title,” Gallon said. “This is about service at a critical time in our history.”

The addition of Gallon and Maria Teresa “Mari Tere” Rojas to the school board, both with more than 25 years in the school system, could signal an emphasis on outcomes in Miami-Dade Public Schools classrooms.

Both will be sworn in during a ceremony on Nov. 22 in the auditorium at the School Board administration building in downtown Miami. Their first meeting as sitting members occurs at the regular Nov. 23 session.

Gallon vowed to make good on his pledges to bring awareness and discussion about school performance — good and bad — in District 1. His supporters hailed his ability to translate statistics and develop plans for failing schools, a feat for which he was hailed as the top administrator in a New Jersey school district.

“That will be a priority to me. It serves a a benchmark to discuss underperformance of schools in District 1 and what we can do to address these schools and provide the resources they need,” Gallon said. “Turnaround starts with awareness. After that it requires an assessment of how did we get here. We have to have a discussion as a board community, and as an administration.

His No. 1 priority is Carol City Middle School, which earned five F grades in a row, Gallon said. That school, Gallon said, “falls on the shoulders of each board member. We’re responsible for all of the children in Miami-Dade Public Schools.”

‘A LOT OF KNOWLEDGE’

“I am happy they are coming on board. They have a lot of knowledge. They know about budgets. I think they will be a very good addition to the board,” said board Chairman Perla Tabares Hantman of the newly elected members. “It’s not like starting fresh from another position. I welcome them with open arms.”

“He reached out to me and congratulated me on election night. He reached me [again] Saturday. I reiterated my commitment to work with the district,” Gallon said.

Residents of District 1 and inner-city advocates, angry at the persistent low test scores and dropping school grades, listened to Gallon’s message and overwhelmingly embraced him in the Nov. 8 general election.

The race for the seat became nasty fairly early. Gallon, Holloway and a third candidate, James Bush III, were hit with criticisms. Gallon endured persisted claims of misconduct during his time as superintendent in a New Jersey School District. Bush faced accusations that he did not live in the district. Critics say Holloway hasn’t pushed enough for changes to improve urban-core schools, and has been part of a school board that rubber stamps the wishes of Carvalho.

After the Aug. 30 primary, Bush filed a complaint alleging that Gallon and two of his supporters “used corrupt election practices that involved (sic) misconduct, fraud, physical assaults and corrupt practices” in order to get Gallon thrown off the ballot.

At Ms. Ann’s Restaurant in Miami Gardens, supporters cheered election night that voters ignored the ugliness of the campaign.

“We’re glad the people woke up and saw what was at stake,” said Gallon supporter Darryl Holsendolph.

“We have a skilled educator who knows the issues at hand,” said William “D.C.” Clark, president of ICARE and frequent critic of Carvalho. “He’ll be able to attack the deficiencies in the district.”

George Gonzalez, a University of Miami political science professor, said the school board races illustrate the anti-establishment mood around the nation.

“The establishment has lost a significant amount of credibility with the public,” Gonzalez said. “Ten years ago, incumbents had the benefit of the doubt. Now, people are paying attention and saying ‘no, I don’t like what’s going on’ and showing up to register their displeasure.”

“He has some flash to him. He speaks directly to Black people who were not comfortable with Holloway’s style,” Dunn said. “Sometimes people just want change.”