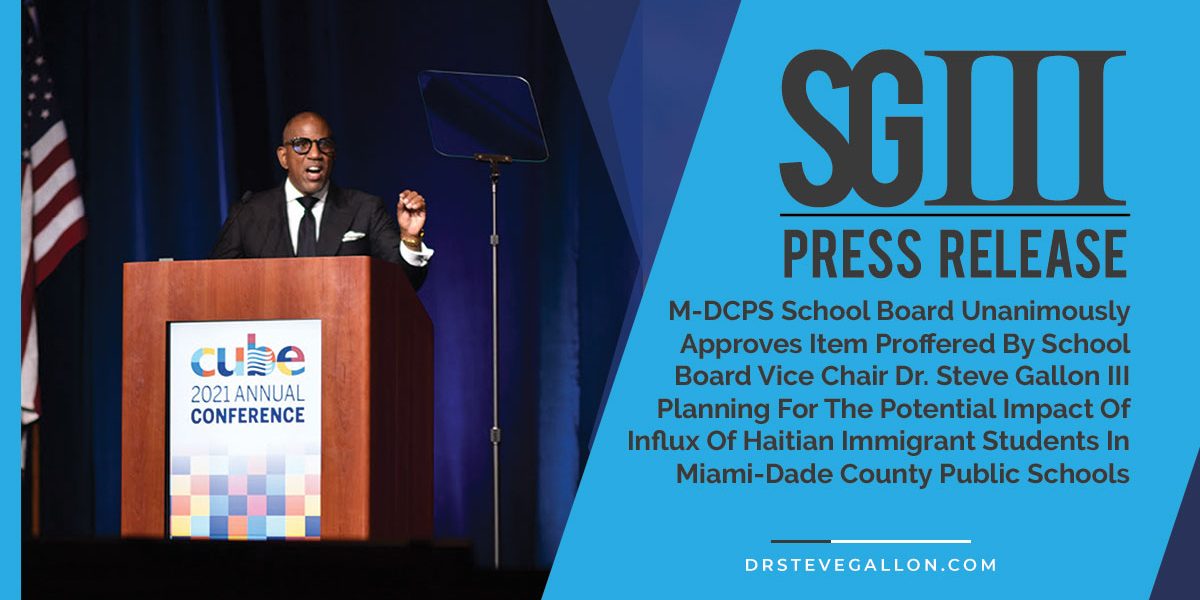 The Miami-Dade County Public Schools (M-DCPS) remains committed to the education and uplift of children, youth, and families regardless of race, ethnicity, or national origin. M-DCPS’ principles and practices are grounded in providing each student with an equal and equitable pathway toward learning and life-long success. Despite its primary purpose of educating students, M-DCPS has been resolute in providing a strong voice of advocacy, support, and service to immigrant students and their families in their pursuit of their life’s goals, hopes, dreams, and aspirations. These efforts have also been demonstrated by the Superintendent, administrators, teachers, and staff throughout the district.

The School Board has consistently demonstrated its conviction in and commitment to providing for and ensuring the education of immigrant children who arrived in the United States due to political and social unrest as well as natural disasters in their native countries. Such immigrant children and families have lived, studied, worked, and prospered in the United States. Many of these families, such as those who arrived from the island of Haiti, do so seeking improved opportunities and the achievement of more prosperous hopes, dreams, and aspirations for their children.

Recently, thousands of Haitian migrants appeared at the United States-Mexico border seeking to cross the Rio Grande and find refuge in the United States. The surge of migrants – mostly Haitian – was reportedly the result of messages by word of mouth or social media that the border at Del Rio was open. The surge was also in the midst of a worldwide pandemic and the recent spread of the Delta variant—a vicious form of COVID-19 that is taking the lives of thousands of Americans at an alarming rate. The surge, which includes women and children, has resulted in chaotic scenes at the bridge, including law enforcement officials on horseback using aggressive tactics against migrants. Such images, which reflect a throwback to periods on the enslavement of Black people in this country, have sparked anger in both local and federal officials, and even others from around the world calling the alleged treatment and makeshift camps under the bridge inhumane. Many Haitians camping under the bridge are believed to have been living in South America since the catastrophic 2010 earthquake in their native country. The economic toll of the pandemic on the region further fueled migration to the southern border, as well as the recent presidential assassination and the earthquake that hit the country in August 2021.

“The Miami-Dade County Public Schools has always demonstrated its commitment to and compassion for immigrant students and their families,” said Dr. Gallon. “The approval of this item is yet again another confirmation through policy to ensure that any and all protocols, provisions, and partnerships are made to our Haitian brothers and sisters, and any immigrants for that matter, that enter our nation and schools after enduring horrific conditions in their native land or sojourn toward freedom and opportunity. I am thankful for the support of my colleagues on this critical matter.”